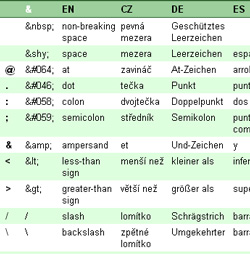 Table of special characters and entities

In a year When I begin to work with Internet,
I co-operated on my stage in Ireland with europe students from different countries. I found I cannot tell them about some characters, because they did not understood English so good. I missed some list or explanation, so I decided to created it.

My list contains the names of the most common characters in these languages:

Later, maybe someone was inspired by my list, began it to create in Wikipedia, but by different way.

I think that the names of entities can be useful also for you.

What is it Entity?

Entity is a sequence of defined characters, which can representing any character.

I love Wiki as a free encyclopedia.   Look at my new SEO project SEO wiki.